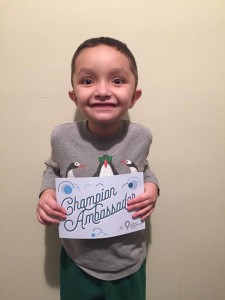 This past year has been great for Kyrie! The best yet. In June, Kyrie started feeding therapy and a blended bolus diet, both of which has been a great success. Kyrie now eats (tiny bits) by mouth and is handling more feed than ever! Kyrie is still on TPN 10hours a day. He was on 7 says a week but because his labs recently have looked so good, his TPN has been decreased to 6 days a week! We have only had 3 short visits to the hospital this past year and hope to continue in this positive way! We were told Kyrie wouldn’t be here with us after the age of 2 but he is thriving and we will be celebrating his 4th birthday in April!

Some more exciting news for Kyrie! For 2016, Kyrie was chosen to represent all pediatric patients of Hasbro Children’s Hospital and the state of Rhode Island by Children’s Miracle Network as the Champion Ambassador! We will be going to Washington DC in June and Florida/Disney in March 2017 for the CMN Ambassador’s Tour! We are honored to represent SBS and share Kyrie’s story to spread more awareness!