Meet Aria and her mom Rachel!

Meet Aria and her mom Rachel!

This is a story about one of our short gut families and their journey. This is Rachel and Aria’s story! 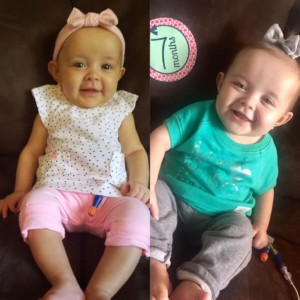 Hello my name is Rachel my daughters name is Aria she is about to be 8 months! I had a pretty normal pregnancy until my 22 week appointment. They did a full anatomy scan on her and seen what they thought was a ovarian cysts. So I started to see a maternal fetal medicine doctor. I had appointments with them monthly and they continued to think ovarian cysts. Then I was hospitalized at 30 weeks Aria was in distress. I was given steroid shots in case she had to come early the day before getting released at 32 weeks another scan was done this time there was dilated bowel that was not there just the week before.

After that I was monitored weekly now they were saying she had a bowel obstruction. Then my water broke at 35 weeks she was born 5lbs crying which I was happy to hear! they took her put a tube down her mouth to her stomach to drain out all the bile. All scans showed is that she had a duodenal atresia. She had surgery at 2 days old to fix a “simple obstruction”. Well was not so simple when her opened her he found something he didn’t expect.. 95% of her small intestines were necrotic he could only save 5 cm but still had full colon and ivc. He said she had a mid gut volvulus.. We were heart broken we were told they didn’t know if she’d survive without a transplant that her liver would get to sick.

She was feisty and wanted to prove everyone wrong! She came home at 2 1/2 months old with central line for TPN, g tube for draining, and an ileostomy that was being fed breast milk with a 10 fringe foly cath. Her bilirubin continued to climb she was glowing yellow. And she stopped gaining weight was stuck at 8 1/2 lbs. Well we were home a month in a half and traveled to Nebraska from Texas to see Dr Mercer for transplant evaluation. Dr Mercer decided to reconnect what she had. He stated he was very surprised with what she had left and it looked really good! He connected 8cm of terminal ileum to a small piece of duodenum she had. While there started on omegaven which absolutely saved her liver!

We came back home to Texas after spending a month in Nebraska! Now been home 3months and she is doing amazing she is now 14lbs 9.5 oz and loves to eat! She gets continuous feeds for 12hours at night and rate is 30ml/hr. Has bottles during the day 3oz every 2-3 hours and loves table food! And just got cut down to 14 hours of TPN. Very thankful for the whole IRP team at UNMC they are very impressed by her! There is more to her story but to much to tell lol! She is definitely kicking short guts butt! (The attached picture is before Nebraska and omegaven and after about a month ago)! And a pic today right be fore her IRP clinic visit!