Genevieve was born on February 17th just moments before her twin sister Gwendolyn.  Genevieve has had a lot of complications in her short life.  She was born with  complex gastroschisis (her entire intestine on the outside of her body).  She had gotten a twist in her small intestine while still in utero which caused the blood not to be able to get to this portion and they eventually died leaving her with grossly dilated upper intestine that dead-ended into nothing.  Because her colon was not attached to anything at one end it did not develop normally and was shriveled and full of holes (microcolon).  At 3 hours old, she had her first surgery to repair all of the holes in her intestine and colon and to create an otemy (opening in her abdomen where her intestine could allow her waste to leave her body).

She spent 8 weeks with an ostomy bag , a bag to collect her waste so that nothing would pass through her colon, allowing it to heal.  When Genevieve was 8 weeks old she had her second surgery, which reattached her small intestine to her colon (anastomosis) and closed up her belly. 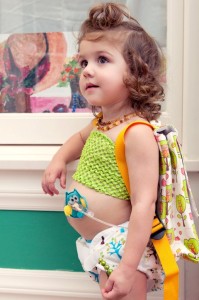 On Mothers’ Day 2010 I was there visiting with her and she was acting strange, crying a lot and just seemed uncomfortable.  It was just out of character for her, she was a normally happy alert baby who is easily comforted.  That evening I left and on the way out the door I mentioned to her nurse that she seemed gassy and to please ask the doctor for something to relieve her pain. I didn’t know then that by the time I got home Genevieve would be almost dead.

I called the hospital when I got home just to check on her and I couldn’t get a hold of anyone.  It took about an hour and the doctor called us to say that she was really sick and they were calling in the surgeon immediately.  She said to get there as soon as possible.  Surgery called us shortly after to get permission to take her back to the operating room over the phone because they were pretty sure she wouldn’t live long enough for us to get there and sign it in person.

We rushed back and we got to the hospital the priest was baptizing her and doing her last rites.  We were in a daze.  They rushed her into surgery and left us by saying that they didn’t expect her to live through it so say good-bye. I was absolutely devastated. I couldn’t even process what was happening.

Genevieve made it through that surgery alive with only a 10% chance.  Her intestine had twisted again (Volvulus) and died inside her.  It caused her to get a deadly infection calledNEC that which kills the affected tissue and starts decomposing it while you are still alive.  It is horribly painful and extremely deadly.  She was to sick and swollen to put what was left of her intestine back into her body so they put it into a plastic bag called a silo on the outside of her body.  She was still tremendously sick but she was still alive against all odds.

Her surgeon came to check on her the next morning and noticed a few areas that didn’t look very good on the intestine that was in the silo.  She scheduled Genevieve for her 4th surgery the next day to investigate those areas.  The next morning she was taken back to surgery.  Her surgeon thought there would be a few inches of not so good tissue that needed to be removed. We were not so lucky.  When the surgeon began to investigate her bowel she found that most of it was dead.  It was so bad that the surgeon herself called us during the surgery and told us that she was in even worse shape that the previous surgery where she only had a 10% chance of surviving it.  Her odds of surviving we so low that she couldn’t give us a percentage for survival.

When she had finished salvaging what she could of Gen’s intestine we all had a meeting.  The news was devastating.  Genevieve didn’t have enough intestine left to survive and what was left was sick.  The surgeon had to sew live tissue to dead tissue because of where the bowel had died.  She was 100% sure that it was going to leak stomach acid into her abdomen so she left her cut open and put a vacuum over the wound to pull out the acid so that she wouldn’t start digesting all of her internal organs.  Her liver was also failing because she had been on IV nutrition for so long.  IV nutrition is not designed for long-term use and causes acute liver failure.  She needed a liver and bowel transplant if she even made it through the night.  She said that we couldn’t even go day by day because it was minute by minute with her.  She was deathly sick. 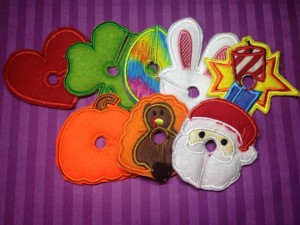 Genevieve wasn’t ready to go yet and against all odds she hung on.  We were counseled to make her comfortable and let her earn her wings because she probably wouldn’t live long enough for a transplant but even if she did the life of an  intestinal transplant patient is hard and she didn’t have much of a chance of survival with one anyway.  Genevieve refused to give up.  She was not ready to die.  We agonized over that decision and decided that if Gen was willing to fight for her life then so were we.

Within a couple of days Gen was fighting against the ventilator but her doctor didn’t want to take it out incase she needed another surgery.  It was really bothering her though so she grabbed it and pulled it out herself.  Everyone was amazed that she was breathing perfectly on her own.  Three holes opened up in her intestine, but her surgeon expected that and the wound vac was keeping her from getting an infection.  Gen was healing so aggressively that her belly wall actually started to close under the wound vac.  Her body is so incredible!

The last two weeks in Jacksonville, some amazing things happened.  She was able to have 2 drains removed from her, she started breathing on her own, she came completely off antibiotics, the wound vac was replaced by an ostomy bag, and one of the holes in her intestine closed on its own!  All of the doctors were astounded at her progress.  The only problem with all of this was that she was still on the IV nutrition that was causing her liver to fail.  Everyday her liver got worse because of it. At it’s highest her bilirubin level was over 15. (that is bad)

The doctors in Jacksonville did their best to minimize the damage and only gave her the lipids (what is suspected to cause the damage) 2 times a week, kept her off antibiotics and gave her phenobarbital to help with the cholestasis.  However, this wasn’t enough calories for her to grow and develop, so it was a balancing act to keep her alive on the medicine that was killing her.

Thankfully, we found out by word of mouth that there is a different kind of medicine for the IV food (called Omegaven) available at Children’s Hospital in Boston, and it has been shown to reverse the liver damage in over 100 children with similar conditions.  After three appeals to the insurance company and a hearing with the board of ethics, we finally got approved for for a transfer to Boston for 30 days.

On June 11th, Genevieve and Itransferred to Children’s Hospital Boston to participate on the Omegaven study.

She spent 3 months in patient receiving IV nutrition called TPN (total parental nutrition) and Omegaven.  He liver slowly began to heal and so did her abdominal wound.  She was taught to swallow and her brain was taught that food equals nutrition even though she was receiving 100% of her nutrition through an IV.  Her stomach and small intestine were drained 24 hours a day.

On August 11th she was strong enough to come home.  She came home on  12 hours of TPN/Omegaven per day whit her stomach  still draining 24 hours a day.

Over the next 12 months we slowly began to feed her and  go down on her IV  nutrition.  We stopped draining her stomach as she tolerated it and her intestine began to work.

She is now 18 months old and has had her central IV removed.  She is now gets all of her nutrition orally like a normal person.  We have to be very careful of her getting enough calories to grow and enough hydration to live but  she is doing well and living a wonderful life.

She doesn’t even resemble that baby that we though would never eat, talk, walk, or grow! 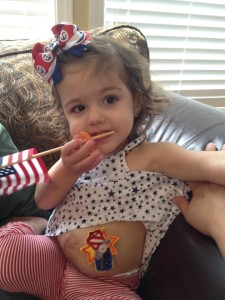