They say timing is everything, and that couldn’t be more true for my daughter Logan, and her new Short Bowel Syndrome Journey. 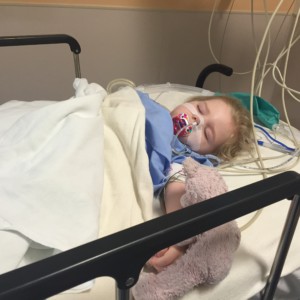 In March 10th 2016, we welcomed our second child, JJ into the world. We were elated! Not only were over the moon for our son, but our daughter Logan (2 1/2 at the time), was a proud big sister. We felt confident, and brave with child number 2. “We got this!” we thought, as we decided to whisk the kids away to the beach for Easter Weekend. JJ was just two weeks old, but that didn’t stop us from throwing them and their endless kid gear in the car, and spending the next few days running on the beach, going to Easter egg hunts, and flying kites. We were having so much fun, that we actually pondered the idea of staying an extra day. But, as we later come to thank God for each and every day, we decided enough fun was enough, and it was time to head home.

That evening, Logan began coughing in her sleep, like she had been for the past week since she started a small cold. She had the habit of coughing so hard sometimes, she would gag herself, and even throw up a bit. This night, was no different. She complained that she was going to throw up, but nothing was coming out. Sleep deprived from being up with the baby, my husband James and I started to get a little frustrated, while Logan started to get more erratic. Screaming, thrashing, throwing herself on the ground, the teacher in me concluded temper tantrum or emotional breakdown. She just lost her “only child” position–she must be having more trouble with the transition with baby brother than we thought. Then she looked at me with the most bewildered eyes—huge, and filled with scared confusion. I will never forgot those eyes.

The night went on with Logan vomiting on and off, and now my husband and I assuming a stomach bug. He ended up making a make shift bed for her on our bedroom floor, while I was with the baby in our bed. As morning came–little did we know that time was ticking, and it was about to be the absolute worst day of our life.

At about 8 am, James woke me up to tell me he had made a doctor’s appointment but they couldn’t take us until noon. As he unwrapped the sheets Logan has been laying in, we began to realize that Logan had not only been puking specks of blood, but now bright red streaks of blood were coming out. I looked at Logan, who was now lethargic, pale as a ghost, and couldn’t even stand up straight. I called the doctor, and then took their orders- “Go to the ER.”

Timing. My sister, Christina, happened to be my substitute teacher, and was also living with us. It was also spring break, so she was home that day. I quickly packed a bag of a change of clothes for Logan, left JJ with Christina, and headed to the closest hospital.

After 5 minutes in the waiting room, we were brought back to take vitals. “Why were there so many people here?  And why are they staring?” I remember thinking to myself. The machines are broken- we are told, her blood pressure was way too low for it to be correct. We will try again, they say. Still the same. Then the whispers start, and Logan’s vomiting becomes more severe.

The next few hours would be a blur of IV’s, blood collections (or lack there of), excessive blood vomiting, lingo being thrown around (Coffee ground vomit? What does that even mean?), false diagnosis including diabetic shock, and overall confusion. “We are going to transfer her to Children’s.” they told us.

Fatigued, nauseous, hormonal, and currently breastfeeding my son, I told the nurse I felt like I was going to faint. I had to leave the room, and get some air. Sitting outside, I happen to be around the corner from the CNMC (Children’s National Medical Center) transport nurse. She didn’t know I heard her on the phone saying, “I am nervous about this one. We need a helicopter.” James rode with Logan, and I drove my Mom in I in the car. The drive downtown was a blur, as I panicked to find the helicopter in the sky above us. Just as we pulled into the hospital, we saw it land on the roof. Temporary relief came over me.

The ER at CNMC welcomed us by sending in a social worker. Still unsure what was going on, or even if she had made it there alive, we found our baby girl in the center of what looked like a Grey’s Anatomy episode. 30+ people, lots of yelling, fast moving, interns staring, tubes, monitors, blood bags, and xrays is what we found there. And later lots of paperwork, lots of signatures, explanations falling on deaf ears, and questions from the doctors still, “Are you sure she didn’t fall?” “No, I don’t think so. Well she did stumble off that high chair, but she seemed ok..right?”, my husband and I’s brains are now spinning in circles. “Is she..dying?” I remember asking my husband. He just shook his head and looked at the floor, “I don’t know,” he said.

After a central line was placed to pump medicine and blood to her heart, Logan had emergency surgery. We were told that she had an intestinal volvulus. She was born with two defects that we have no idea about. One caused her intestines to constantly be sliding in and out of a hole, while the other was a remnant from the umbilical cord when she was a baby. These two defects, became the perfect storm to twist her intestines, eventually killing over 2 feet, and causing her severe blood lose (hemorrhagic shock), and septic shock. The surgeon confirmed that taking her to the ER, now over 12 hours ago, was the right move. More time meant more intestine lost, or even life loss.

Logan’s surgery removed her ileum, and gave her a temporary ostomy. She was in the PICU on a ventilator and feeding tube for 5 days, and then the Surgical Care floor for 3 more weeks. We did in home care with a PICC Line and an IV for 1 week after that. As we struggled to keep her from dehydrating, our surgeon made the call that an earlier surgery was better. We were lucky enough to have re-connection surgery 4 weeks post emergency. 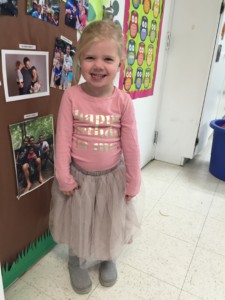 Currently, Logan is 9 months post-emergency, and overall, a thriving, happy, feisty three-nager.  We are closely monitoring her restricted diet, giving her round of antibiotics, tracking her weight, giving her vitamin supplements, and Elecare and ORS for malabsorption.

Sometimes those days in the hospital seem like a lifetime away, and other days it seems like yesterday. We know we are just beginning our journey with Logan’s SBS, but feel confident that after that day in March, we can tackle just about anything. Time has been good to us. Time saved our daughter’s life. And now time is what we treasure most. Time with our children, enjoying life, together.