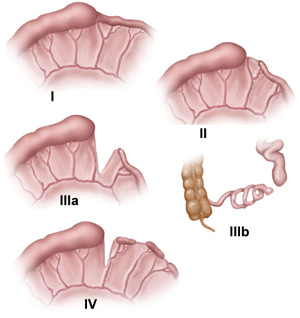 Jejunoileal atresias are complete obstructions of the jejunum or ileum

More common in the jejunum, equal in males and females and may be single or multiple in nature

Associated anomalies are less common than in duodenal atresias

Jejunoileal atresia – This involves an obstruction of the middle region (jejunum) or lower region (ileum) of the small intestine. The part of the intestine that is blocked off expands, which lessens its ability to absorb nutrients and pushl its contents through the digestive tract. There are four subtypes of jejunoileal atresia:

Infants with any of the four types of jejunoileal atresia usually vomit green bile within a day of their birth. However, those with obstructions farther down in the intestine may not vomit until two to three days later. A baby with jejunoileal atresia may develop a swollen belly, and not have a bowel movement during the first day of life the way most babies do.

Intestinal obstructions are increasingly being identified through prenatal ultrasounds. This imaging technique may indicate excess amniotic fluid (polyhydramnios), which is caused by the failure of the intestine to properly absorb amniotic fluid. If your physician suspects intestinal atresia or stenosis, your infant will undergo the following diagnostic procedures after being stabilized:

Due to the high percentage of infants born with intestinal atresia who also have associated, life-threatening abnormalities,echocardiography and other imaging studies of the cardiac and renal regions may also be performed after the infant is stabilized.

With jejunoileal atresia, the type of surgery depends on the type of atresia, the amount of intestine present and the degree of intestinal dilation. The most common operation involves removal of the blind intestinal segments, and the remaining ends are closed with sutures. Similarly, a narrowed (stenosed) segment of the intestine can be removed and the bowel sutured together, thus establishing intestinal continuity.

Children who undergo surgery for intestinal atresia require regular follow-up to ensure adequate growth and development, and to avoid nutritional deficiencies that may occur as a result of the loss of intestine.

How babies progress depends to a large extent on whether there is an associated abnormality and whether or not the baby is left with an adequate length of intestine. In general, however, most babies do well. Complications after surgery are rare, but may occur. In the immediate to early postoperative period, intestinal contents may leak at the suture line where the ends of the bowel were sewn together. This may cause an infection within the abdominal cavity and require additional surgery. Complications that may later occur include malabsorption syndromes, functional obstruction due to an enlarged and paralyzed segment of intestine, or short gut syndrome.